(This is the second part of my six-part travel blog series. The first part is here.)

Unlike Rome, Pompeii is not a city where you have to worry about offending the locals.

Let’s talk first about how to get to Pompeii, starting from Rome. This wiki page is pretty helpful, though it can use a few caveats.

First: when doing extensive research for any trip and estimating a budget based on travel costs you find online, always round up a small percentage, because the prices listed (no matter how authoritative the source) have certainly gone up since that page was published. If they haven’t, then congratulations, you have some money for an extra gelato.

Second: beware TrenItalia, especially if you’re trying to book trips from the U.S. Yes, it is significantly cheaper to buy them with at least a week’s advance; good luck accomplishing that unless you have an inside contact in Europe (preferably within Italy). I found it impossible to purchase the trips I wanted — every time I tried, the confirmation page showed me trips at entirely different hours than the ones I had chosen from the list provided. I began to lose more than my patience (temper, hair, sanity, you name it). Fortunately my travel companion, who lives in Europe, had better success (though TrenItalia still tried to deceive her the same way). And no, the company does not seem to have any reliable phone lines that might be used for purchases by telephone or customer support. Even my Italian friend agreed with me that TrenItalia is the worst and suggested I look at ItaloTreno instead.

Third: this is mentioned in the wiki article, but not with sufficient emphasis. Are you thinking of visiting Pompeii with such small children that a stroller is required? Don’t. You are going to have a bad time. Forgo all Pompeii plans for several years, until those children can sustain themselves on their own feet and also not whine  incessantly about walking for hours to see a lot of old stones in the sun.

One way or another, you get your tickets. Once you board your train (hopefully an express that takes one or two hours) be sure to use the restroom aboard the train, because once you’re inside Napoli Centrale, you’ll need a euro to access the bathroom.

As for changing trains to Pompeii, the wiki page is accurate in its instructions to take an escalator down, following signs for Circumvesuviana trains. Don’t fret about purchasing these tickets in advance — I don’t believe there’s any price advantage, and it’s too difficult to predict the best departure time. Besides, if you haven’t brought a meal with you, you’ll want to purchase food at the cafe nearest the Circumvesuviana ticket window, as that may be your last chance to acquire good food for affordable prices anywhere near Pompeii.

After you get your tickets to Pompeii Scavi, look for a nearby desk to the right where a cordial man behind a glass window will earnestly assist you with reading your ticket, finding the correct train at the correct time, and warning you through pantomime to beware of pickpockets. Do not miss out.

Now you will take the Circumvesuviana train, which is the first real adventure of seeing Pompeii.

Here is an unshakable truth: It’s going to be packed with tourists and pickpockets, possibly in equal numbers.

Walk as far down the platform as possible, because the train won’t stop all the way inside the station. Otherwise, when the train arrives and the doors open, you will become one of a swarm running for the doors before they close, but also striving to get as far as you can from the end so as not to be squashed once you’re inside.

Once inside the train, don’t stay in the entryway before the doors. Every seat in the carriage may be taken, but you’ll find more breathing room if you stand in the middle aisle and hold onto the bar above your head. Less chance of hands slipping inside your bag and pockets, too.

Also, if you think it’s impossibly crowded now, that won’t stop a small band from squeezing their way in at the next stop and starting some energetic tunes to serenade you the rest of the way to Pompeii.

So move into the carriage, get a good grip on a bar, keep your other hand over your bag’s opening, and enjoy the Napoli scenery flashing by. It’s pretty.

likely someone’s backyard gardens, with the Tyrrhenian Sea in the background

Italian hills on the other side, between Naples and Pompeii

Now for the big question: how much time do I need to see Pompeii?

Well, that depends on another question: How excited do you get about archaeology and ruins? And of course, if the purpose of your visit is academic rather than leisure, you’ll need to visit a scholar’s blog for better estimates and directions than these.

Pompeii is a good-sized city, and I estimate it would take you at least two full days to see every nook and cranny (that isn’t gated off for official archaeologists). We felt satisfied seeing approximately one quarter of it, which took half a day. Our tour covered a limited section — not much outside of Regions VII and VIII, as shown on the map below. But I highly recommend walking to Region II, where the gardens and grand amphitheater are.

Map of Pompeii with regions

When one pictures Pompeii, the image usually features stone streets such as these:

So I was surprised to find that living things do grow in Pompeii.

inside the walls of the arbor

I asked the tour guide about the trees and plants, and he said that they were planted about 200 years ago, after archaeologists identified from petrified roots the species of flora that grew before volcanic ash buried the city, so they planted the same. (I hope this is true. The same tour guide told us the vulgar vomitorium myth, so we had some trust issues.)

Like Rome, Pompeii is friendly to its guests by supplying drinkable water faucets throughout the city. Fortunately, the original lead pipes have been replaced with a safer metal. 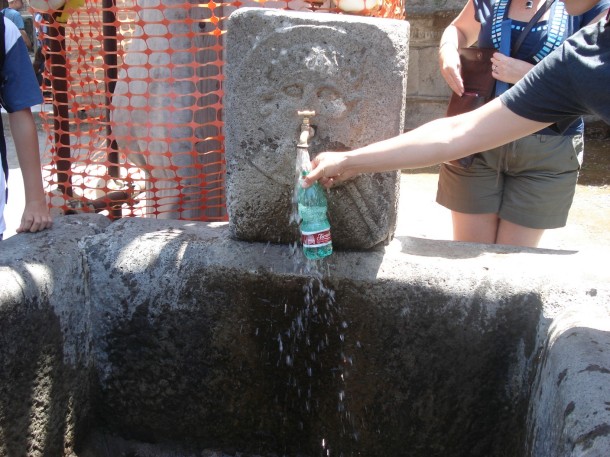 water provided by a long-dead city

One of my favorite parts of visiting ruins like Pompeii is to see details of people’s everyday lives, some of which I’d learned about years ago in my college classes. 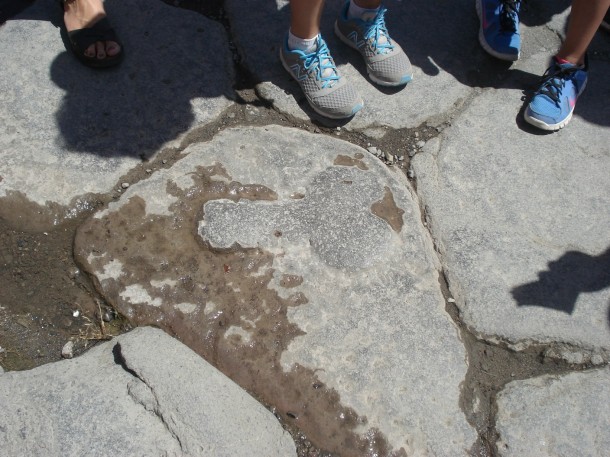 an engraving advertising the services of the nearby business

speed bumps to discourage carts from splashing sewage on pedestrians 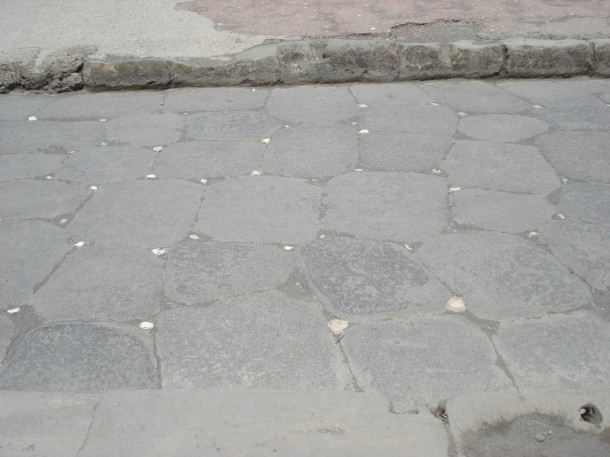 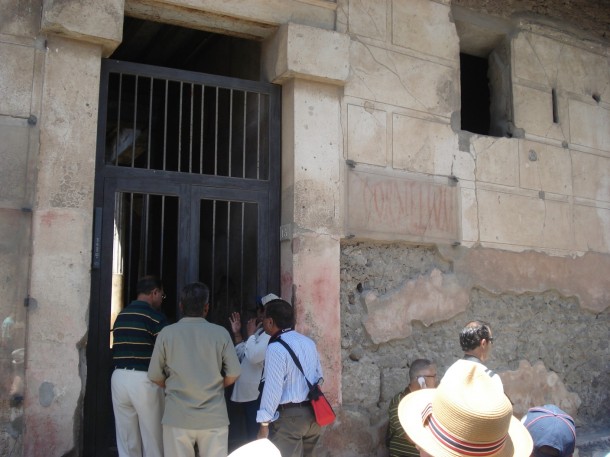 a politician who boasted of Cornelius’ patronage before an election

entrance of a patrician’s home

mosaic entrance, with the hills of Italy in the background

intricate mosaic around a shallow pool inside a patrician’s home

frescoes (that’s all I’ve got, but they’re pretty) 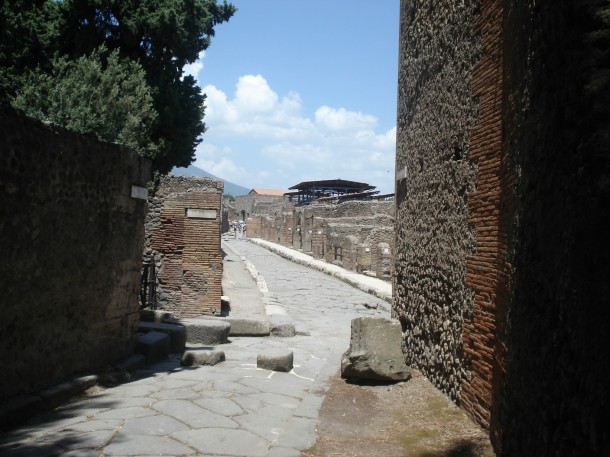 yes I do enjoy street views 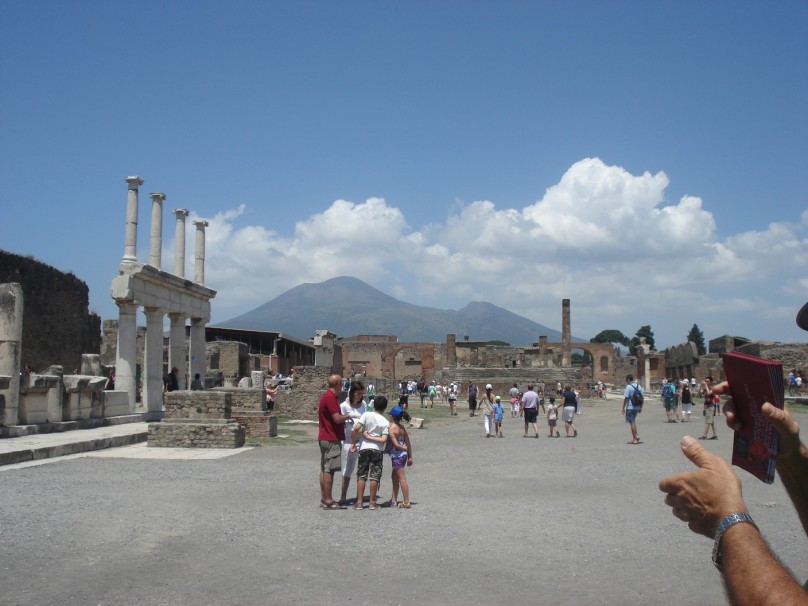 Pompeii forum and site of the basilica, with Mount Vesuvius in the background

tourists being tourists near a very old statue of Apollo

Again, I highly recommend walking down the long streets toward the grand ampitheater, because you eventually get somewhere wholly different. 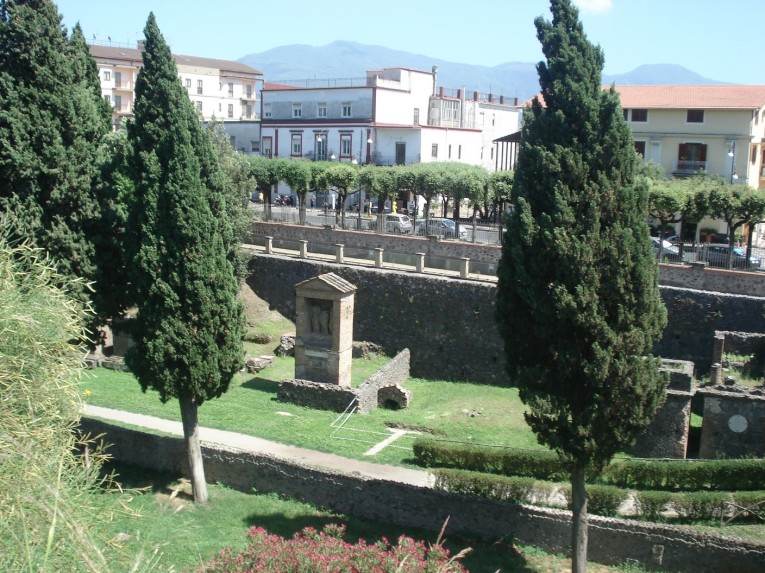 Pompeii gardens, with the modern city beyond the wall

One might feel a Secret Garden effect, to stand in an ancient garden so close to the hum of the 21st century. 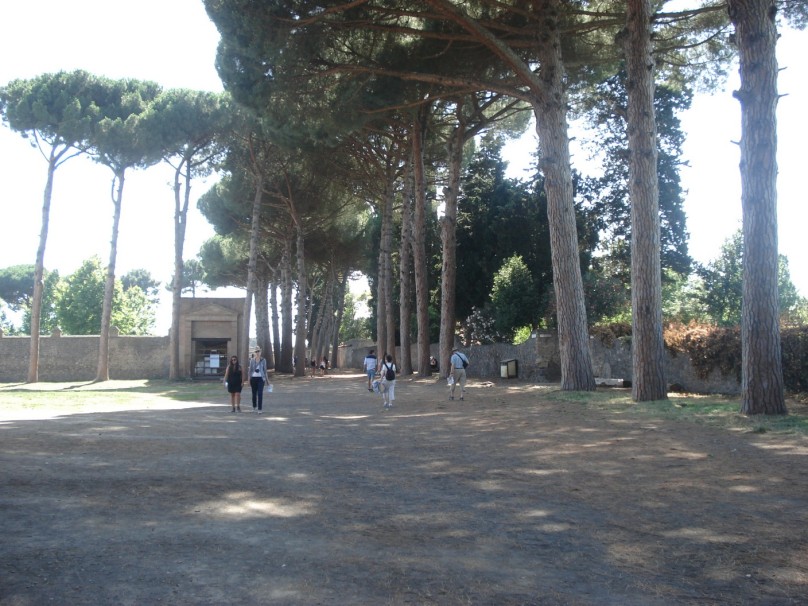 courtyard between the grand amphitheater and gymnasium

And in case you need a reminder for why this is all here, so well preserved…

One of my favorite tips from the suspect tour guide was how to grasp the pre-eruption size of the volcano: just draw a mental image with two lines extending those outside slopes, until you reach a peak. Then you understand how much of it blew up and came down to smother that region.

Google Maps, as ever, is also helpful in grasping the scale of the volcano in comparison to surrounding cities and town.

It took me a while to see it, until I realized — oh. That entire green circle. Well, that explains it.